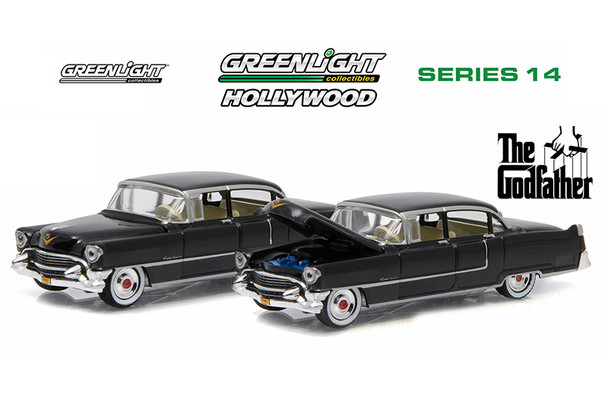 44740B/48 Greenlight - Hollywood Series 14 | "The Godfather" 1955 Cadillac Fleetwood Series 60 Special (1972 movie). This 1/64 scale Cadillac is 3.5" long diecast model car. GreenLight has put the love of the silver screen into something slightly smaller with 1:64th scale replicas. GreenLight Hollywood takes iconic film and television vehicles from both the past and present and brings them to life with four-wheeled diecast replicas. 1:64 scale diecast collectible model. Each car individually blister carded. Card size: 5.75" x 7.75". Manufactured by Greenlight. Item 44740B/48 is in BLACK.
The Godfather is a 1972 American crime film based on Puzo's 1969 novel of the same name, the film stars Marlon Brando and Al Pacino as the leaders of a powerful New York crime family. The story, spanning the years 1945 to 1955, centers on the transformation of Michael Corleone (Pacino) from reluctant family outsider to ruthless Mafia boss while also chronicling the Corleone family under the patriarch Vito Corleone (Brando).
The Godfather is widely regarded as one of the greatest films in world cinema and as one of the most influential, especially in the gangster genre. Now ranked as the second greatest film in American cinema (behind Citizen Kane) by the American Film Institute, it was selected for preservation in the United States National Film Registry in 1990.

MSRP:
Now: $6.99
Was:
44830/48 Greenlight Hollywood Series 23 - GreenLight has put the love of the silver screen into something slightly smaller with 1:64th scale replicas. GreenLight Hollywood takes iconic film and...

MSRP:
Now: $29.99
Was:
The latest release in AMT’s series of Coca-Cola models is value-packed and features some special bonuses. First, and for the first time ever, additional optional custom wheels have been added...