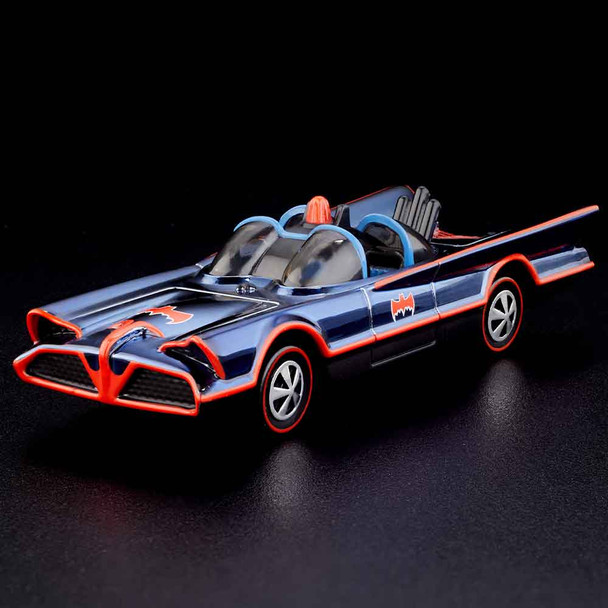 You’d keep the streets of Gotham City clean, too, if you were cruising in this slick ride! Batman™ has had a Batmobile™ since about 1940, but this TV Series Batmobile™ has likely been the most favored and iconic of them all. This version was brought to life for the 1960s television show, designed by customizing legend George Barris. Rarely seen in anything but black, we’re loving the blue/black comic book look of this RLC Exclusive edition.

Barris famously based his design on the 1955 Lincoln Futura Concept Car, a road rocket of its own. In fact, rockets fire from tubes behind the cockpit! Other tricks he installed include a cable cutter and bulletproof plexi-glass bubble windshields. Our 1:64 edition was designed by Phil Riehlman in 2007, and we’re still thrilled for new editions to come tearing out of the Batcave™-- er, Design Center.

The Spectraflame steel blue finish on this edition is accented by a red BATMAN™ logo on the hood and sides with red linework on the front, sides, and rear with a matte black-painted chassis. Featuring Neo-Classics Redline wheels and full-metal construction, this 1:64 piece includes light smoke-tinted windows and a black interior with blue-painted seats and a red-painted siren dome. It’s suspended on an illustrated RLC blister card within a Kar Keepers clamshell case.

Warning: Choking Hazard - Small Parts
Not for children under 14

MSRP:
Now: $32.99
Was:
The popularity of the classic Batman TV show has gained a resurgence with a flood of new product hitting the market for collectors to enjoy. This offering of the Batmobile features all of the parts...

MSRP:
Now: $70.00
Was:
Ten years ago, a Japanese Domestic Market (JDM) legend made its Hot Wheels debut. It's been produced as both a mainline and premium casting over the years, but never at the Red Line Club level...

MSRP:
Now: $49.99
Was:
M2 Machines would like to introduce you to Driver release 78 (11228-78). The collection includes six of the lines more popular castings, each painted and trimmed with a new look and feel. Each...

MSRP:
Now: $70.00
Was:
Ten years ago, a Japanese Domestic Market (JDM) legend made its Hot Wheels debut. It's been produced as both a mainline and premium casting over the years, but never at the Red Line Club level...

MSRP:
Now: $70.00
Was:
Jazz up your favorite room with a comfy and vibrant bean bag! Note that the cover has no filling, but the bottom zipper makes it easy to fill the cover with a filling of your own choice. • 100%...